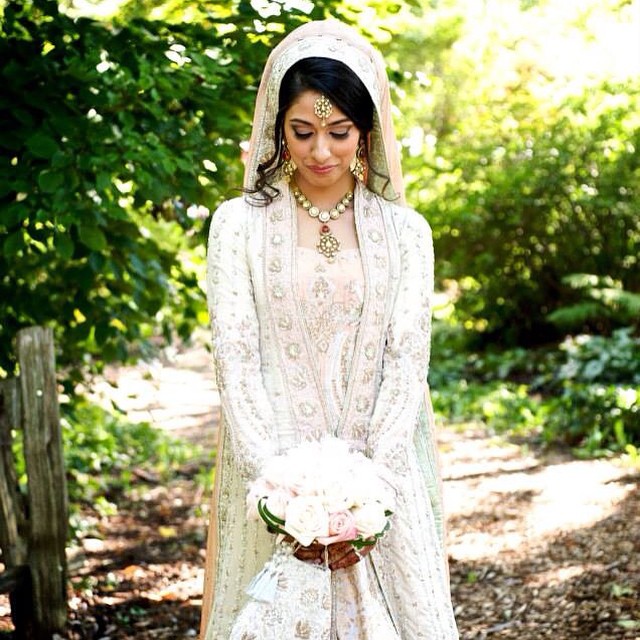 In India, the wedding rituals and clothes make the wedding as much as that of the bride and her groom. Both look their splendid best in gorgeous clothes. Not just the couple, but the guests attending the family and the relatives are often seen dressed up to the teeth. The bride is dressed up in auspicious colors, whereas the bridegroom is dressed to exude a regal aura. The bridesmaids and best men are often dressed on a par with the bride and the groom. But they are toned down a bit because the day belongs to the couple. All the folks attending the marriage are decked out with gold jewelry including the bride and sometimes the groom. The ladies are additionally adorned with henna patterns all over their palms, hands, forearms, legs and feet (Indian wedding henna and dress examples here). Sometimes henna patterns are replaced with alta designs which are short lived and easily removable.

The groom also sports henna, although it is less elaborate or muted. Indian weddings generally tend to continue for several days and new attire is worn each day. All these dresses and the colour symbolize the meaning of marriage and the period that follows it. Indian wedding is one that gives more importance to details like different rituals and the various attires one wears to attend them.

Many communities of South, West, and Eastern India still adhere to the traditional costumes, i.e. Dhoti, or sometimes Lungi, and Mundu by some communities of the South. Kurta or a shirt may be worn or sometimes just a Angavastram may be used to cover the chest. On the other hand, in the Northern parts, the bridegroom usually wears a Sherwani, Jodhpuri suit, or a western suit. The groom’s face is covered with a veiled with a curtain of flowers which is called Sehra in the North, which is not the custom elsewhere. It is also customary to wear a Taqiyah all through the ceremony in Muslim marriages.

Many prefer to wear a Kurta. A Kurta can be worn with Salwar, or Dhoti.

The ensemble for bridegrooms include majestic sherwani, blended Indo-western suit and ethnic Jodhpuri suit. The exquisite shirts, coats, and jackets are designed with extra care and touch to bring out the magnanimity out of the bridegroom on the marriage day. Precious embellishments are studded into the collars and the cuffs of the bridegroom’s dress. Available both in simple cotton and splendid, royal raw silk, these Kurta Pyjamas are preferred mostly by the bridegrooms.

The bride wears a saree or a lehenga according to the region. Red is considered to be the most auspicious color in among Hindus. While the saree is preferred as the bridal dress in South India, West, East India, most brides of other parts of India prefer Lehenga, Gagra Choli and Odni as bridal dresses.

Christian marriage in India is mostly an adaptation of western wedding ceremonies. Here the bridegroom wears a western suit or tuxedo. The Bride usually opts for a silk saree or a western gown.

The typical Indian Hindu marriage ceremony does not usually have the concept of bridesmaids. But in many Hindu weddings, women in family often prefers to wear either a sari, lahenga, anarkali salwar suit or simple salwar kamiz. Contemporary and Indo-western wear has also started gaining popularity among Indian women as wedding wear.