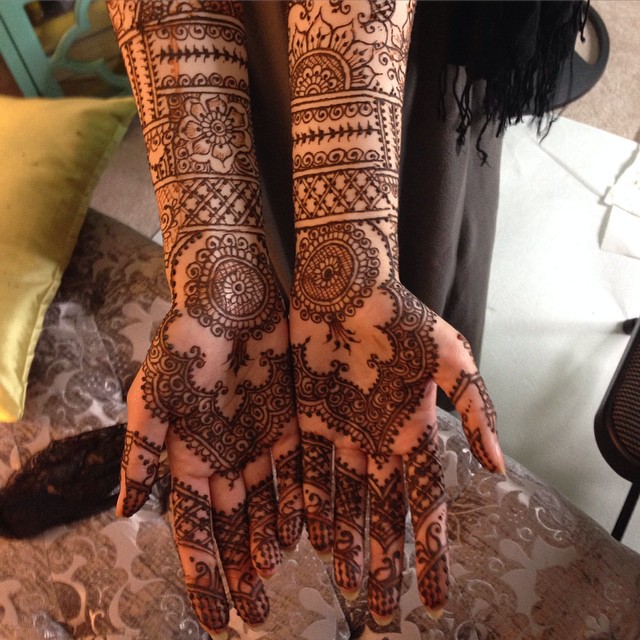 Henna is a dye prepared from the plant Lawsonia inermis, also known as hina, the henna tree, the mignonette tree, and the Egyptian privet,[1] the sole species of the Lawsonia genus. The English name “henna” comes from the Arabic حِنَّاء‎ (ALA-LC: ḥinnāʾ; pronounced [ħɪnˈnæːʔ]) or, colloquially حنا‎, loosely pronounced as /ħinna/.

The name henna also refers to and the temporary body art (staining) based on those dyes (see also mehndi). Henna has been used since antiquity to dye skin, hair and fingernails, as well as fabrics including silk, wool and leather. Historically, henna was used in the Arabian Peninsula, Indian Subcontinent, parts of South East Asia, Carthage, other parts of North Africa and the Horn of Africa. The name is used in other skin and hair dyes, such as black henna and neutral henna, neither of which is derived from the henna plant.

Since it is difficult to form intricate patterns from coarse crushed leaves, henna is commonly traded as a powder[4] made by drying, milling and sifting the leaves. The dry powder is mixed with one of a number of liquids, including water, lemon juice, or strong tea, and other ingredients, depending on the tradition. Many artists use sugar or molasses in the paste to improve consistency and keep it stuck to the skin better. The henna mix must rest for 1 to 48 hours before use, to release the lawsone from the leaf matter. The timing depends on the crop of henna being used. Essential oils with high levels of monoterpene alcohols, such as tea tree, cajeput, or lavender, will improve skin stain characteristics. Other essential oils, such as eucalyptus and clove, are also useful but are too irritating and should not be used on skin.

The paste can be applied with many traditional and innovative tools, starting with a basic stick or twig. In Morocco, a syringe is common. In India, a plastic cone similar to those used to pipe icing onto cakes. In the Western world, a cone is common, as is a Jacquard bottle, which is otherwise used to paint silk fabric. A light stain may be achieved within minutes, but the longer the paste is left on the skin, the darker and longer lasting the stain will be, so it needs to be left on as long as possible. To prevent it from drying or falling off the skin, the paste is often sealed down by dabbing a sugar/lemon mix over the dried paste, or simply adding some form of sugar to the paste. After time the dry paste is simply brushed or scraped away.

Henna stains are orange when the paste is first removed, but darkens over the following three days to a deep reddish brown. Soles and palms have the thickest layer of skin and so take up the most lawsone, and take it to the greatest depth, so that hands and feet will have the darkest and most long-lasting stains. Some also believe that steaming or warming the henna pattern will darken the stain, either during the time the paste is still on the skin, or after the paste has been removed. It is debatable whether this adds to the color of the end result as well. After the stain reaches its peak color, it holds for a few days, then gradually wears off by way of exfoliation.